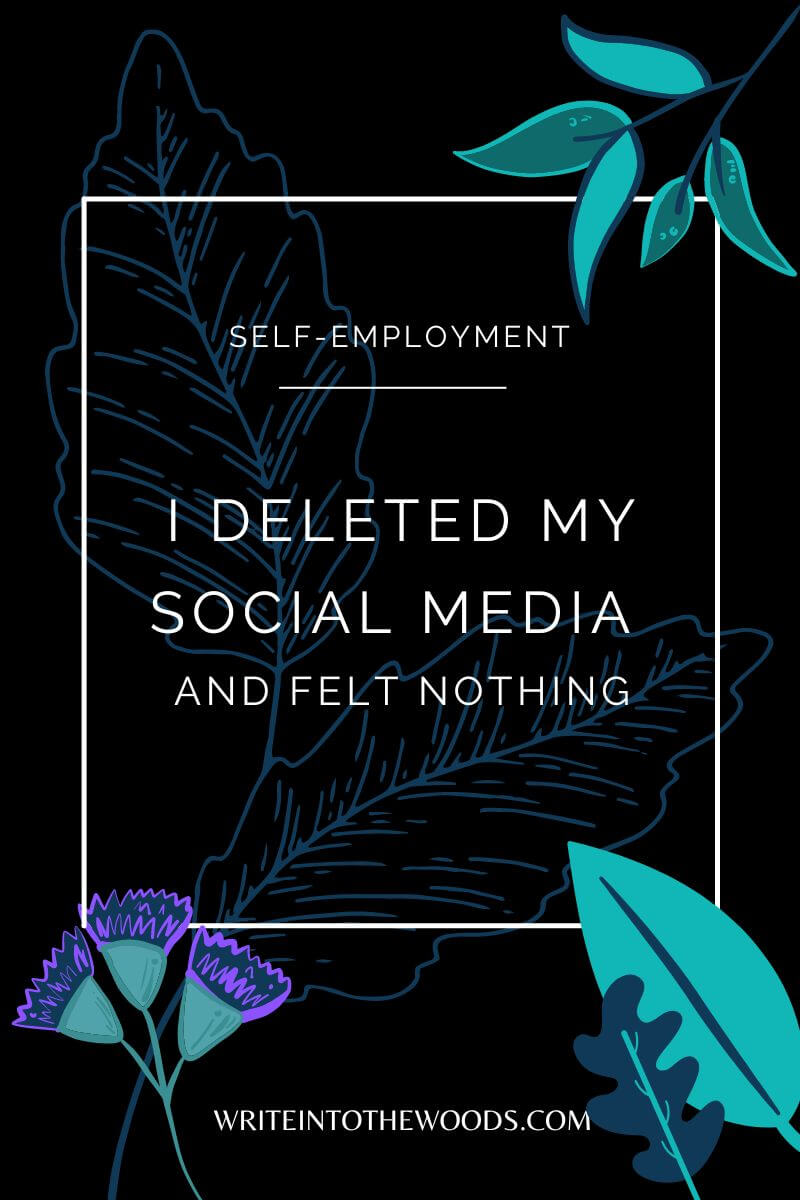 I spend a lot of every December looking back over the year just gone, and this time I discovered that in 2022 I read two books, one after the other, about deleting your social media accounts.

They were good books, too.
One was written by an ex-Silicon Valley expert, one of the people who pioneered social media and has since been educating people on just how bad social media is for our brains. The other book is by a journalist and is essentially a diary of his experiences giving up social media for a year.

Given that I read them one after the other you’d be inclined to think that I was pondering deleting my social media accounts.
And you’d be right.

Previously when I’ve taken a break from social media, I delete the apps from my phone and feel an immediate lack. A lack of noise, of people, and in the space created by this lack, loneliness will creep in.

I was fully expecting that feeling when I deleted the Instagram app from my phone just before Christmas 2022. But instead, after wishing my Instagram friends merry Christmas and explaining that I’d be gone for nearly two weeks, I hit delete and felt an enormous…weight lift from me.
There was no regret, no FOMO, no loneliness. But there was perhaps a hint of relief.

And for the rest of the Christmas break, every now and then, mostly when my husband was on Twitter ignoring me, I’d ponder if I’d ever go back to Instagram.

I often say that if I wasn’t running a business, I’d have deleted all of my social media accounts a long time ago.
It’s already nearly happened. I deleted my Twitter account years ago (and if I hadn’t, I would have when Musk took over). While my Facebook account still exists, it’s purely to be a part of two or three Facebook groups. My favourite group is considering leaving Facebook, and if they do I’ll follow them and delete my account.

Instagram, however, is different.
I joined Instagram late in the day, but it was still all about photos and images. Stories came in soon after and I actually felt quite excited about these little things I could share that would disappear in twenty-four hours.

I found friends and I’ve since found clients, although I’ve personally found the community side of things hard to get into.
Then reels came along and the noise amped up, and now everyone has to make videos or they don’t get seen. And I just…can’t. (I can. I have. But meh.)

I’m a writer, so in theory I should be on Twitter, writing mini blogs and using my words, but Twitter has been a toxic cesspool for a long time. I couldn’t stand it there.
No, Instagram is pretty. It’s colourful. There are interesting people. And it’s much easier to curate the content you see…or it was.

My feed is full of pretty interiors and Scottish landscapes and updates from my favourite people…until Instagram showed me one reel about a horse and I watched it. Suddenly my feed is full of horses…and where have my favourite people gone? I know they’re still out there posting. No, Instagram, I don’t want a sob story reel about a rescue dog that will definitely make me cry.

No matter what social media app you’re using, if you’re on there often enough the noise will get to you. All those voices, all those videos, those audios and messages, will claw their way into your brain.
At best you can hear those damn audios on a loop in your head. But it’s okay, because someone made a damn stupid audio of the damn stupid audios on a loop to use in a reel!

At worst, it eats away at your confidence, your self-esteem, your self-worth, your self.
And after a truly horrible year, I think this is the very reason why I felt nothing when I deleted the app.

Nothing, Though? Really? Why?!

I gave my relationship with social media a lot of thought over 2022. Technology and social media is constantly changing, in that what works one month may not work another month. But in hindsight, I’ve never really gotten social media to work the way I wanted to.

The apps are designed to be addictive and they truly are. Just the act of picking up your phone regularly for no obvious reason is a habit ingrained in most of us, going straight to social media is another habit.
Although I think I’ve managed to break the addiction that Instagram once held over me, especially thanks to this break, I still haven’t broken the habit.

Is age an issue? Possibly.
The joy of being the age I am means that I grew up without social media. I’m lucky. I remember what life was like before, and the older you get the more you reminisce. When comparisonitis was restricted to your friends, books and the TV, but back then it felt more aspirational. Probably because I didn’t know where life would take me and I found that so exciting.

Maybe I’m getting too old for social media. Sick of dancing, talking, pretending, all for a screen and a hope that some people out there will like it.
That’s never what I’ve been about.
I’ve always just wanted to live in stories.

As much as I love certain people on Instagram, when I did reinstall the app on 3rd January, I wasn’t blown away by the content that awaited me. It was all the same. Nothing had changed. And the only reason I kept going back to the app throughout the day was because I was catching up with friends.

What To Do About This Feeling

I wish I could delete all social media, but I can’t. And it isn’t just because I don’t want to lose touch with some lovely people I’ve managed to befriend along the way.
It’s because I’m self-employed.

But then, ‘can’t’ isn’t really a word that self-employed people understand.

You can’t quit your job with nothing to go on.
You can’t build a business out of your hobby.
You can’t pack your laptop in your suitcase and work while travelling.
It’ll never work.

Except that it does work, doesn’t it.

I was so tempted to announce in this post that I will be quitting social media and experimenting with other forms of marketing this year, but then I looked back at what Instagram has given my business: the majority of my favourite clients. And I’m not giving them up for the world.

However, I am going to cut down on my Instagram usage. No more scrolling reels for an hour in the name of ‘research’ so I can make reels that no one will watch. What’s the point? It doesn’t lead to sales (of books or services, in my experience).

No, I’m just going to keep being me on there and I’m going to spend less time doing it. My content will still be planned out, but I’ll be posting less.

If this social media break over Christmas has taught me anything, it’s that my time is better spent elsewhere. Namely, writing and working on my own projects as well as projects for clients. Because after a break from Instagram, suddenly the words were spilling out of me and I was able to write regularly again.

You know what else? Whenever I take a break from social media, I become more me. I remember who I am. Just by not watching what everyone else is doing, I remember what I love doing and I do more of it.
And that’s the life I want. It’s certainly the business I want.

If social media feels like banging your head against a brick wall, take a good look at what it’s giving you back. Maybe you have friends and great clients on there, so you can’t quit, but you can reduce your time. Maybe it is bringing in sales but it doesn’t need you personally so you could outsource it.
Or maybe it gives you nothing and it’s time to hit delete. The only way to find out is to take a break and see what happens.

On a last note, if you’re on Instagram and you’re not deleting your account, it would be great to connect. Come follow me, let me know you found me through here and I’ll follow you back. It’s always nice to make new Instagram friends.

Oh, and those two books I mentioned at the beginning of all this!

Here they are:
(Disclaimer: These are affiliate links. If you buy/download the books through these links, I get a little money but it doesn’t cost you any extra. It’s a win-win!)

A Year Without Social Media by Ben Wilson